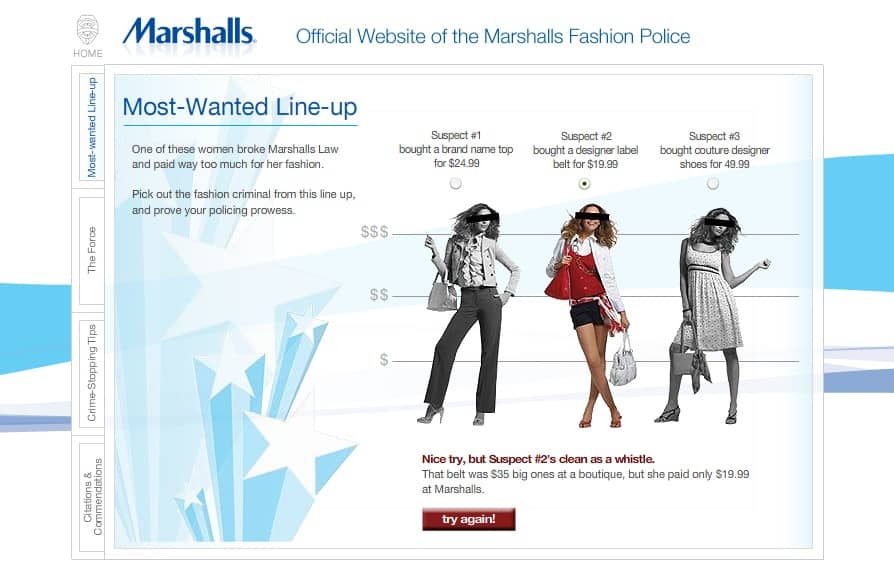 Marshalls is a multi-billion-dollar off-price retail company whose shoppers (more female than male, roughly ages 25-55) are equally interested in fashion and value.

The public relations team wanted to play off the Marshalls Law campaign with a “fashion police” street team event and matching minisite. The challenge was to make the site fun, fashionable, and game-like, while making it very clear that, in this scenario, the fashion police were fining people for paying too much for their fashion. The Marshalls Law campaign, concepted by an external agency, centered around the idea of conveying a message (most often regarding value) via an axiom. For example: Marshalls Law #42 Get great Father’s Day gifts for just a few bucks a pop. (My copy.)

In this scenario, since this was a temporary campaign within the brand, I opted to mix the Marshalls voice with a stereotypical 1950’s police/Dragnet-style voice “Nice try, but Suspect #2’s clean as a whistle” to play up the campaign and make it more fun. The game aspect engaged visitors, while supporting both the fashion police concept and the overall Marshalls value message.